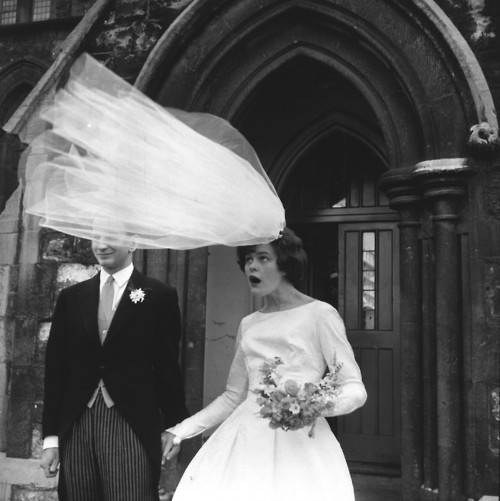 I had the lovely pleasure of a visit from my in-laws this past week. Dustin and I are lucky enough to be close to his parents, and when they come into town it's like a visit from friends.

I was sharing a particularly beautiful wedding  feature I was working on with them, and the discussion naturally turned toward our own weddings and engagements. I asked Kitty how Dean had proposed to her.

No You tell her…

They describe their engagement as “practical”. They were living with Kitty's two sons. Kitty's mom was but demanding that they get married, and fast. She offered to watch the kids if they eloped. In hindsight Kitty suspects this suggestion to elope was a plot to avoid paying for a big wedding.

Kitty and Dean were young and raising a family. So they figured, “Why not – what else were we going to do?”

There's a powerful look-back lesson in this:

The “Why Not” Lesson:

The wedding really isn't about “getting married.” It's about the relationship.  That big, lifetime thing at the end of the party. As fun as a wedding is (and it is a lot of fun), a wedding is only a party, and it's only just the beginning of a big, robust, and often complex life together.

It was perfect, until it wasn't…but then it was…

Kitty and Dean eloped on the Gulf Coast in Florida, with four of their 4 of their closest friends in attendance — two other couples. Kitty and Dean bought flowers from a wholesale florist and arranged them together.

In retelling the story, both agreed that the flowers were amazing. {More giggles.}

Even the professional gardener at the hotel commented on the beauty of the arrangements. (Of course, Dean also arranged our wedding flowers for the NC wedding.)

Kitty wore a tea-length wedding dress and had her hair and nails professionally done—her curly hair pinned up with baby's breath.

It's a romantic story really…except for the airplane that sprayed pesticide to control for mosquitoes the day before the wedding.

And then there was the hard partying. While Kitty was woefully sick with pesticide poisoning, the groom and the rest of the wedding party got drunk. Really drunk. very one of them was sick with hangover on the day of the wedding.

“Can't we just postpone the wedding until tomorrow?” the Groom pleaded.

Then there was the wind…

It was a calm day, a calm week even…until it was not.

Watching them tell the story is pure comedy, with each pulling their hair straight back behind them each time ‘The Wind' is mentioned.

“We walked toward the gazebo and “The Wind” was blowing our hair straight back,” Kitty explained as she tugged her own hair back from her nape.

More laughter as everyone imagines Kitty spending all day in the salon getting her hair done. Yes, this really is funny now — their laughter and joy coming from Kitty and Dean as they recount their wedding story is infectious.

“And my sister and her husband…”. Again, Kitty pulls her ponytail straight back from her scalp, mock struggling as she recalls ‘The Wind'.

It's funny because Kitty and Dean are still together after all this time. Still happy and full of laughter.

It's important to see this side of the wedding: the thirty-years-later side.

I realize that their relationship is so much more than that elopement on the beach. That their elopement ultimately had no bearing on what their marriage would grow into. No one's wedding does. It's just a party, really. Having an amazing wedding doesn't mean your marriage will be amazing, and having a simple elopement doesn't mean a thing either.

So I'll leave you with these final look-back lessons:

No matter what happens, you'll still be married in the end. Bad weather, hungover friends and family, and even pesticide poisoning won't change that.

Even painful or frustrating situations become funny over time. They add character, nuance, and leave you with delightfully personal memories of your wedding. As Morrissey (from The Smiths) once said, “I can laugh about it now, but at the time it was terrible.” Indeed! What a wonderful time we all had recounting Kitty and Dean's crazy elopement.

But the loveliest thing about marriage is that the momentary “terrible” is soon replaced by a lifetime of laughter…if you let it.

♥ Thanks so much to my wonderful in-laws for sharing their story with me (and with Mountainside Bride readers.) I love you both! ♥