Recently, I was happy to see a wedding on the Today Show where a groom wore a pale seersucker suit. The suit is shown during the first minute or two of the clip, and the featured groom is in a suit that is almost exactly like the suit my Groom wore at our wedding. (Yay!) The best part: we paid a little more than $130. for the entire suit, and now The Groom has a nice summer suit.

At first, The Groom and I looked at the traditional tuxedos. He was excited about the prospect of getting so dressed up, and had admitted that he had never wore a tux before. (No, not even to the prom). At $160 a pop for a rental at the Men's Warehouse, we were struggling to fit it into our paltry budget. The Groom began cruising the department store sales instead. 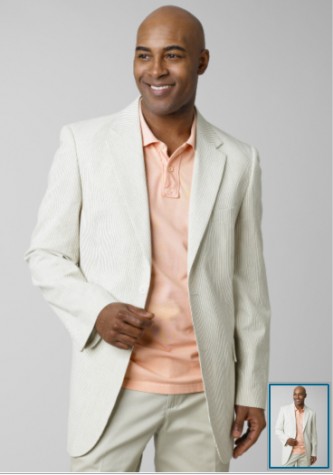