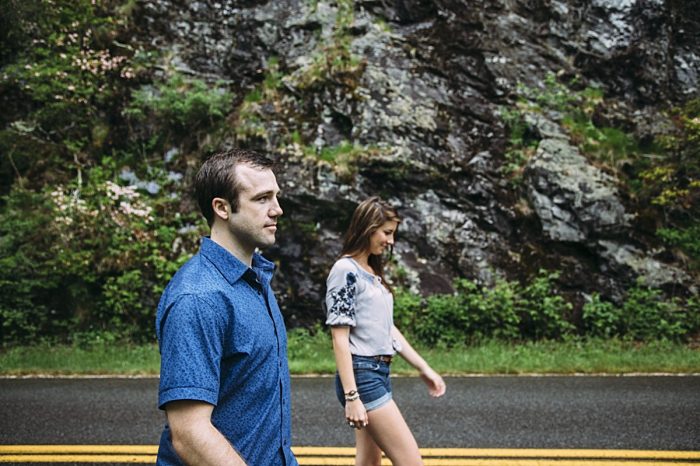 This adorable engagement session on the Blue Ridge Parkway, captured by Fox and Owl Studio, is the perfect mixture of fun and romantic. Pattie (the Bride)  and Andrew designed that beautiful ring in the next picture. In Patties own words, “It represents A little bit of me and a little bit of him, my great grandmothers diamond and a touch of quirky. It is absolutely perfect!” Read more about this sweet and fun-loving couple below. 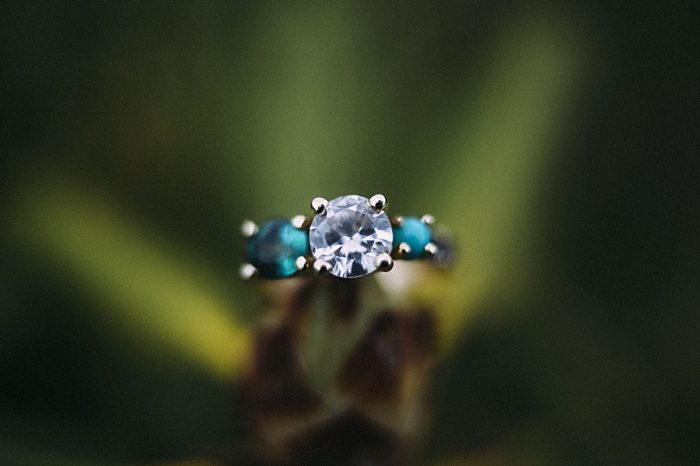 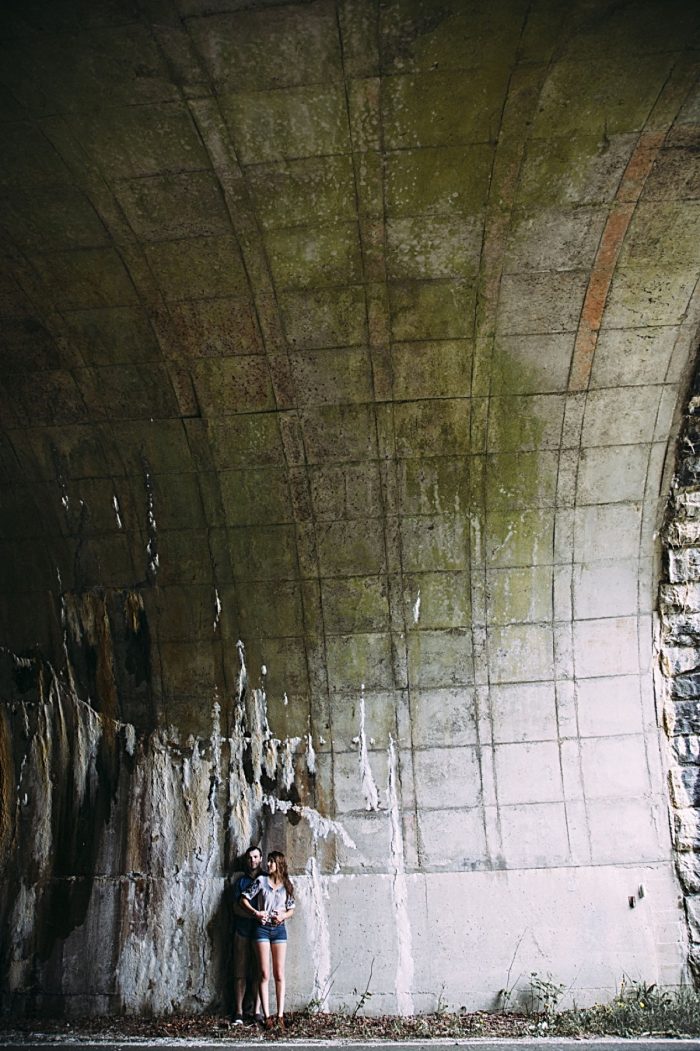 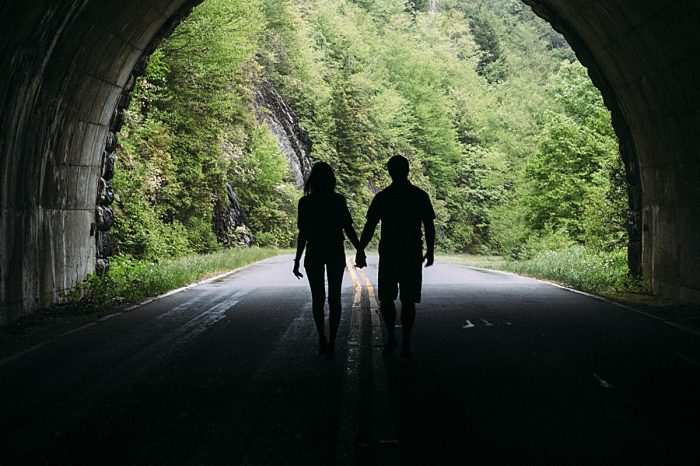 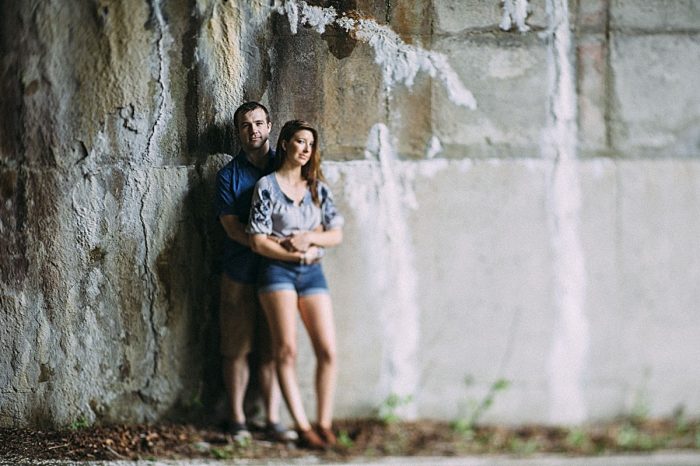 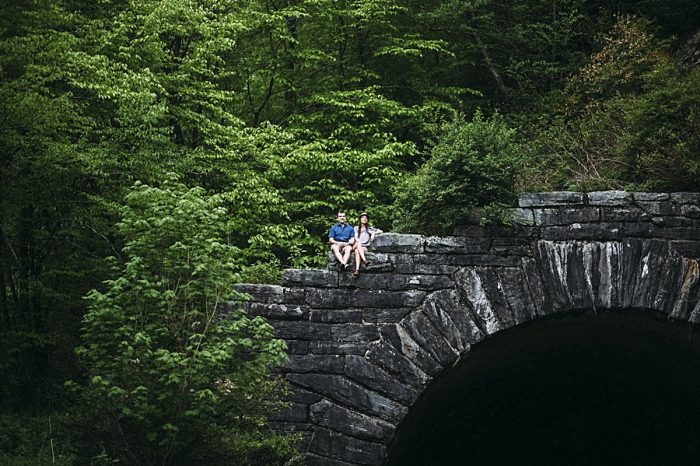 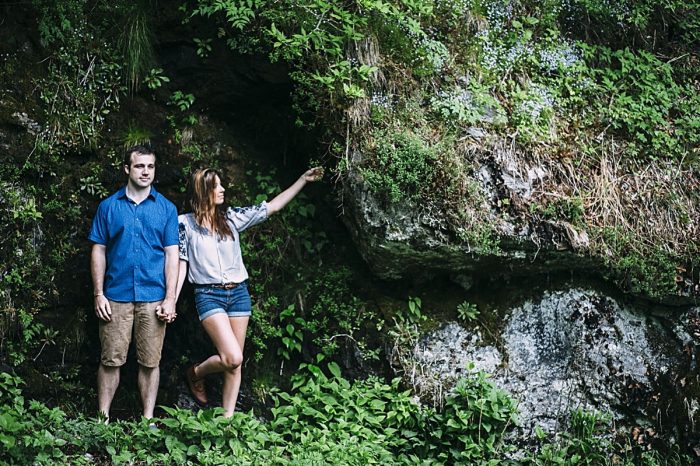 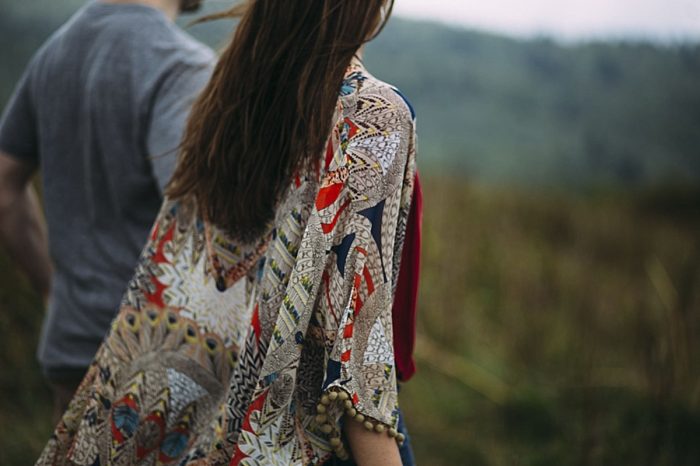 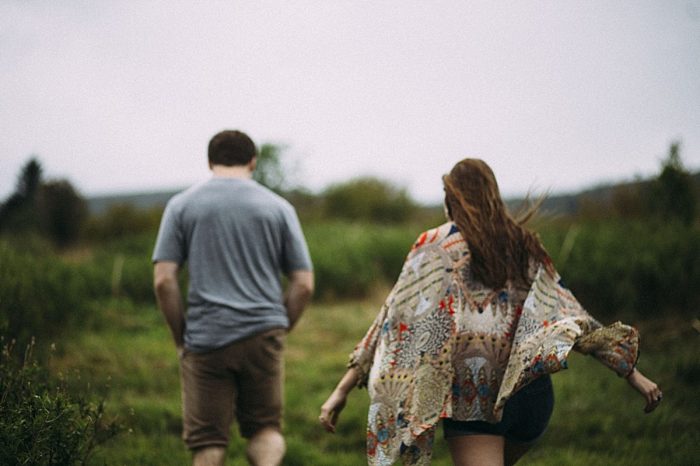 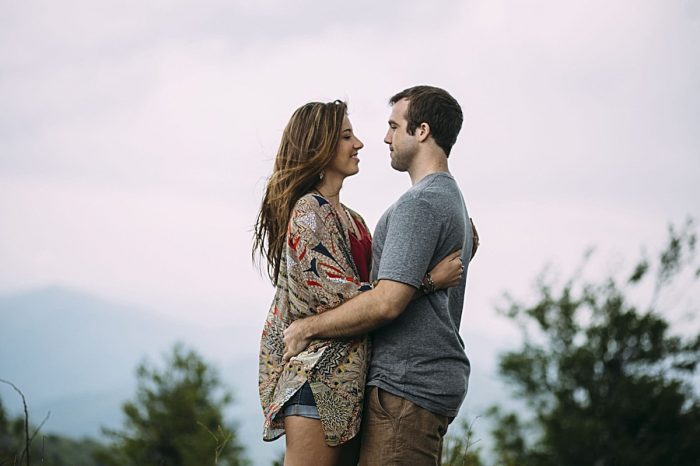 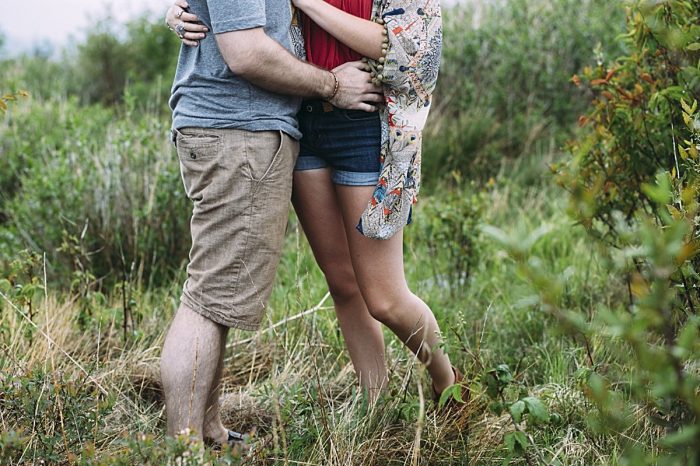 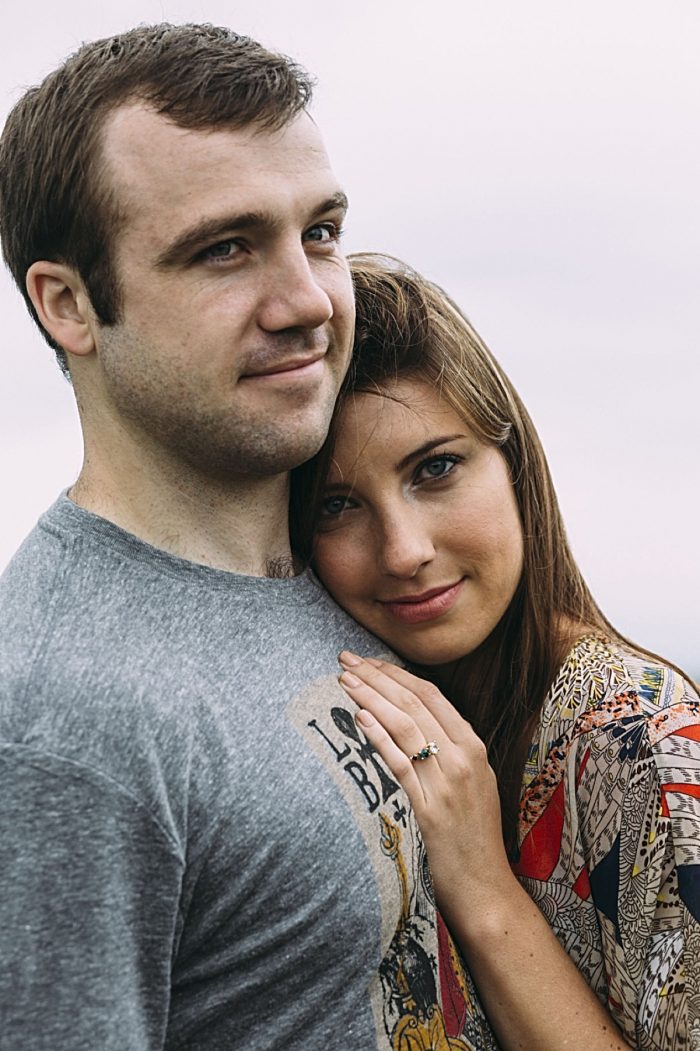 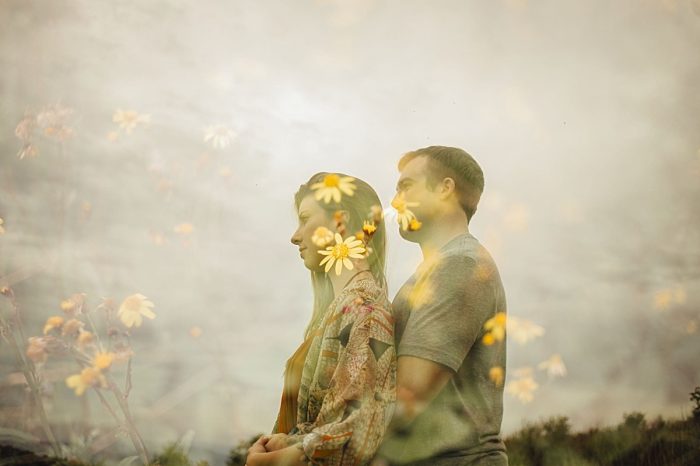 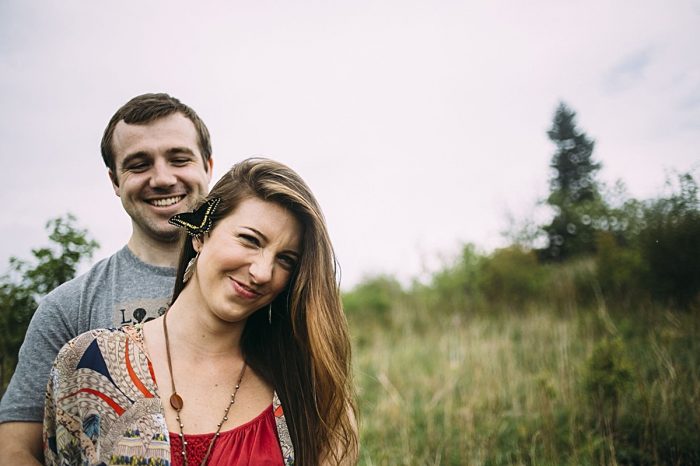 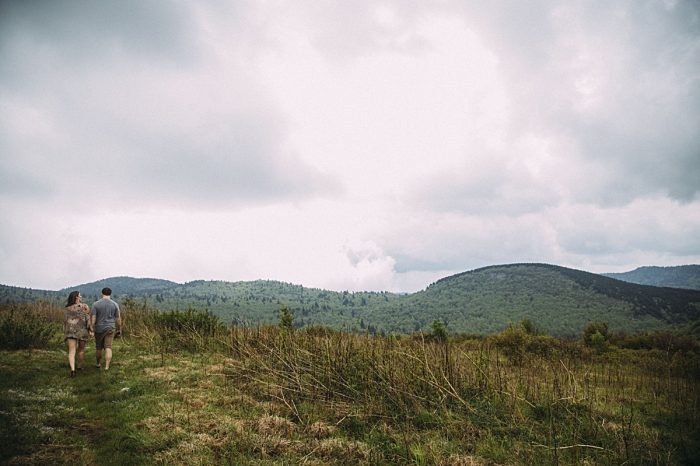 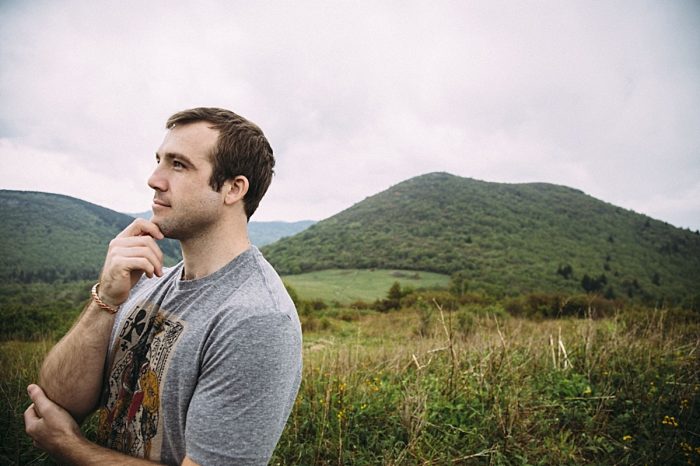 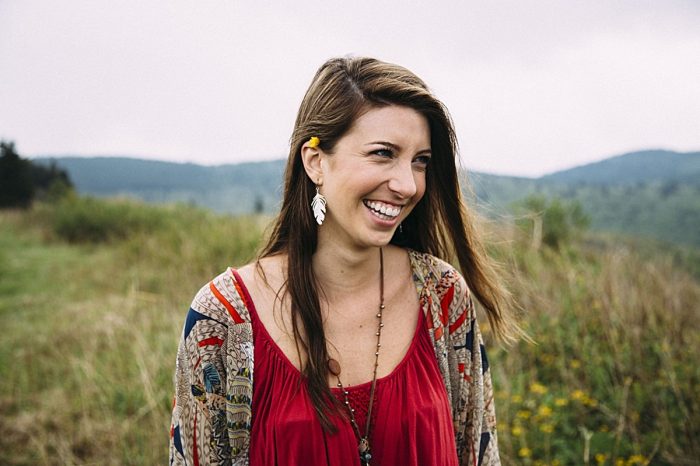 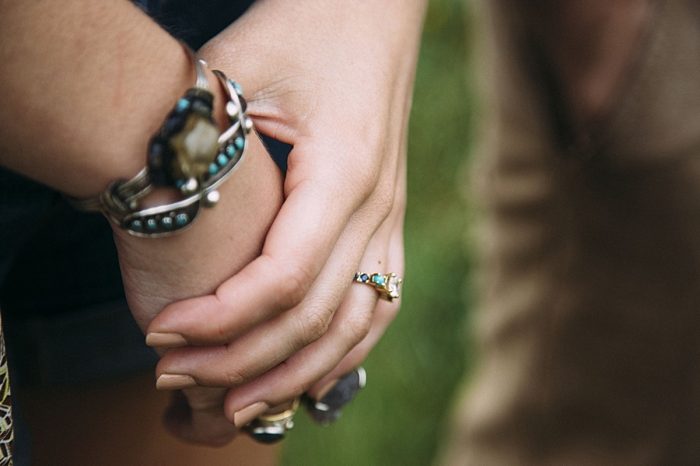 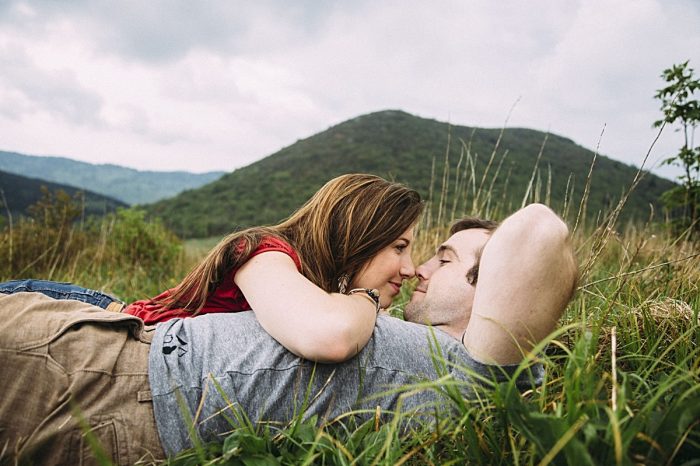 Andrew and I met back when I was in college. He is originally from New Zealand and came to the US for a job that was unfortunately given away to someone else last minute so he was a bit stuck. He had to get a job to save money to go home, and in the process, he met me…and got even more stuck ;) We met while working at the same country club. I can remember the day I met him. My heart literally stopped when I saw him…it was like a fairy tale…except in this fairy tale, I had a boyfriend so I was unavailable…oops. Though I really loved the guy I was with, there was just something different about Andrew (besides his adorable New Zealand accent). He felt something for me too and even looked over at his friend after I quoted his favorite movie and said “that’s wife material right there”. He was actually going to ask me on a date until he heard I had a boyfriend. After that we just stayed friends for about 8 months.

The turning point was when it was time for me to graduate and move away. I was working my last few weeks before graduation and started to think about a life without Andrew in it. It was unfathomable. On my last night of work all of the staff went out for drinks as a last hurrah and Andrew and I didn’t want it to end. So he asked me if I would go out for a bite to eat with him at Waffle House. Around 4 hours later full of laughter and conversation, we left the Waffle House and I realized that I couldn’t give him up. That week I made a life changing decision to break up with my boyfriend, stay in Raleigh, and take a job with a local nonprofit that was offered to me. If I wasn’t offered that job, I don’t know if I would have stayed. Funny enough, I’m still working there today.

After that we were inseparable. The proposal came two years later when Andrew and I were visiting his home, New Zealand, for the first time. On a warm Thursday morning, January 3rd 2013 to be specific, Andrew decided he wanted to take me on a hike up a mountain near where he grew up. So I put on my new hiking boots (stupid) and off we went to Peel Forest. The hike was about 3 hours long…filled with complaining and wanting to stop and saying “this is far enough” (I’m apparently not a great hiker in new boots). Andrew finally dragged me to the top of the mountain and I collapsed. All of the sudden, Andrew asked me to stand up (I later learned that this was because a woman was coming up the hill and he didn’t want an audience haha). After a bit of protest, I agreed, and he said “Now you know who I am, this is all of me, and this is where I come from, and I hope you still love me”. I laughed and noticed he was shaking…then all of the sudden he got down on one knee and said “Pattie, will you marry me?”. And I did a very confused ”Really?! Yes?! I mean, no…I mean YES! I mean, no…wait…REALLY?” and eventually came to a “YES!” And then we were engaged :)

He asked me with his grandmother’s ring. She actually gave it to us on loan because Andrew knew I was picky and would want to create something myself. The ring in the photos is the ring that Andrew and I had made. We worked together with a local jewelers near my parents home. A little bit of me and a little bit of him, my great grandmothers diamond and a touch of quirky. It is absolutely perfect!