Fun Loving Dreamy Mountain Sunset Engagement session at Minnewaska State Park in New York Hillary, like every other woman, is obsessed with fall colors. She wanted an outdoor vibe that showcases the beauty of nature. They ended up choosing Minnewaska State Park in New Paltz which might be one of the most magical places in all of NY state. Aside from being beautiful, it’s really accessible and easy to navigate, which is important if you’re in a dress. The area has an incredible waterfall, cliffs overlooking the water, and some of the most beautiful tree-lined paths. You get a ton of variety in scenery without needing to do extreme hiking. 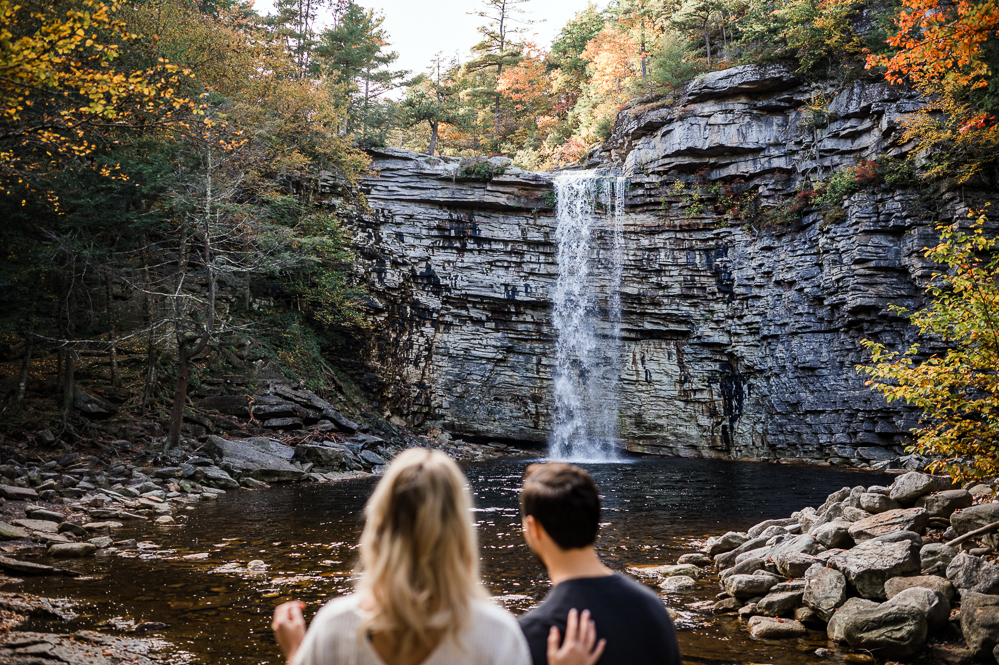 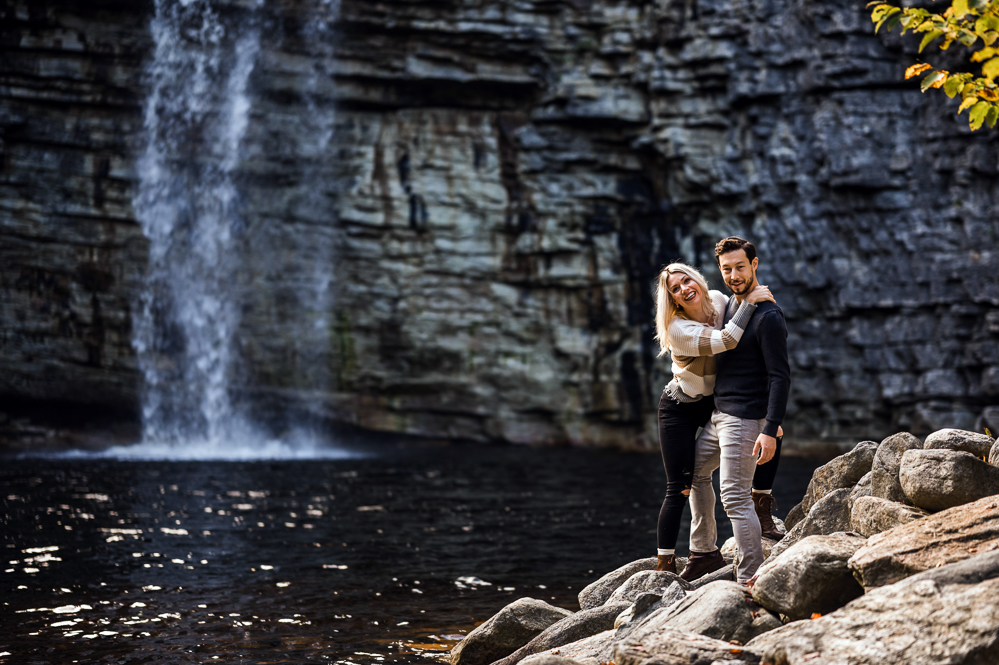 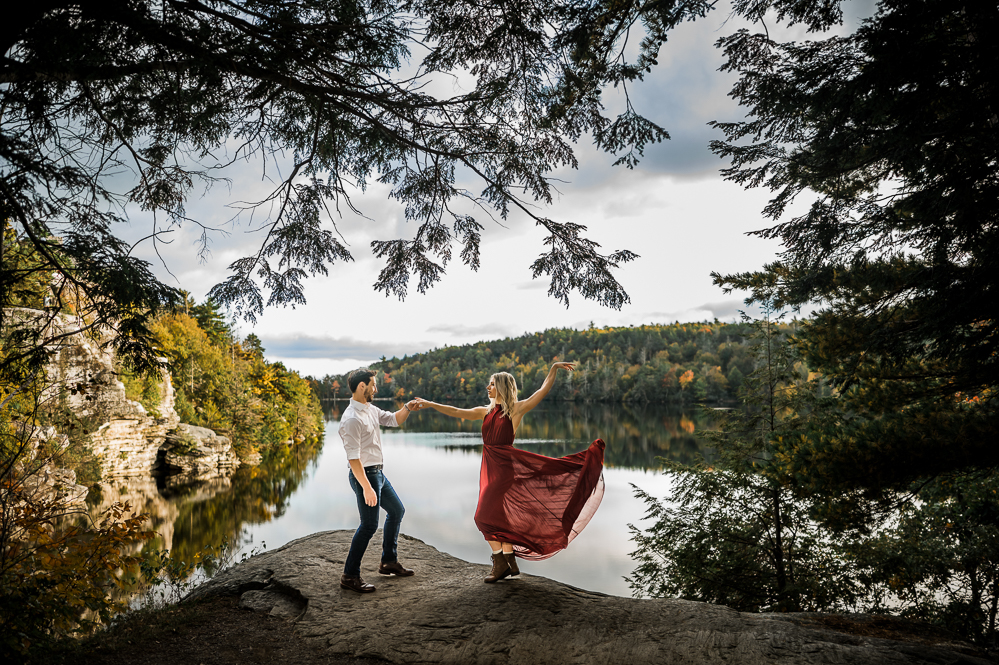 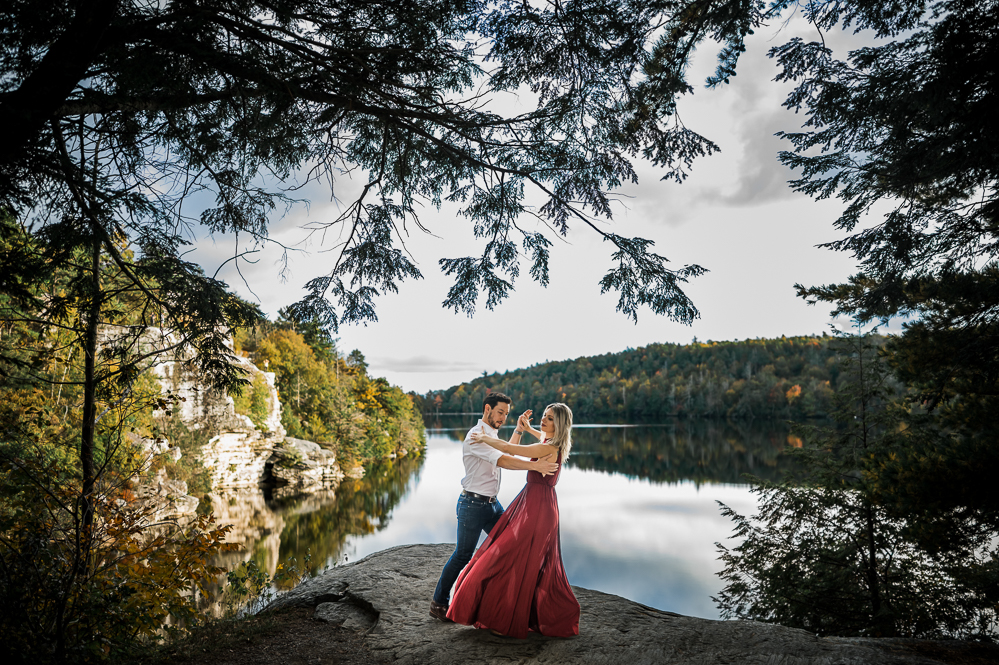 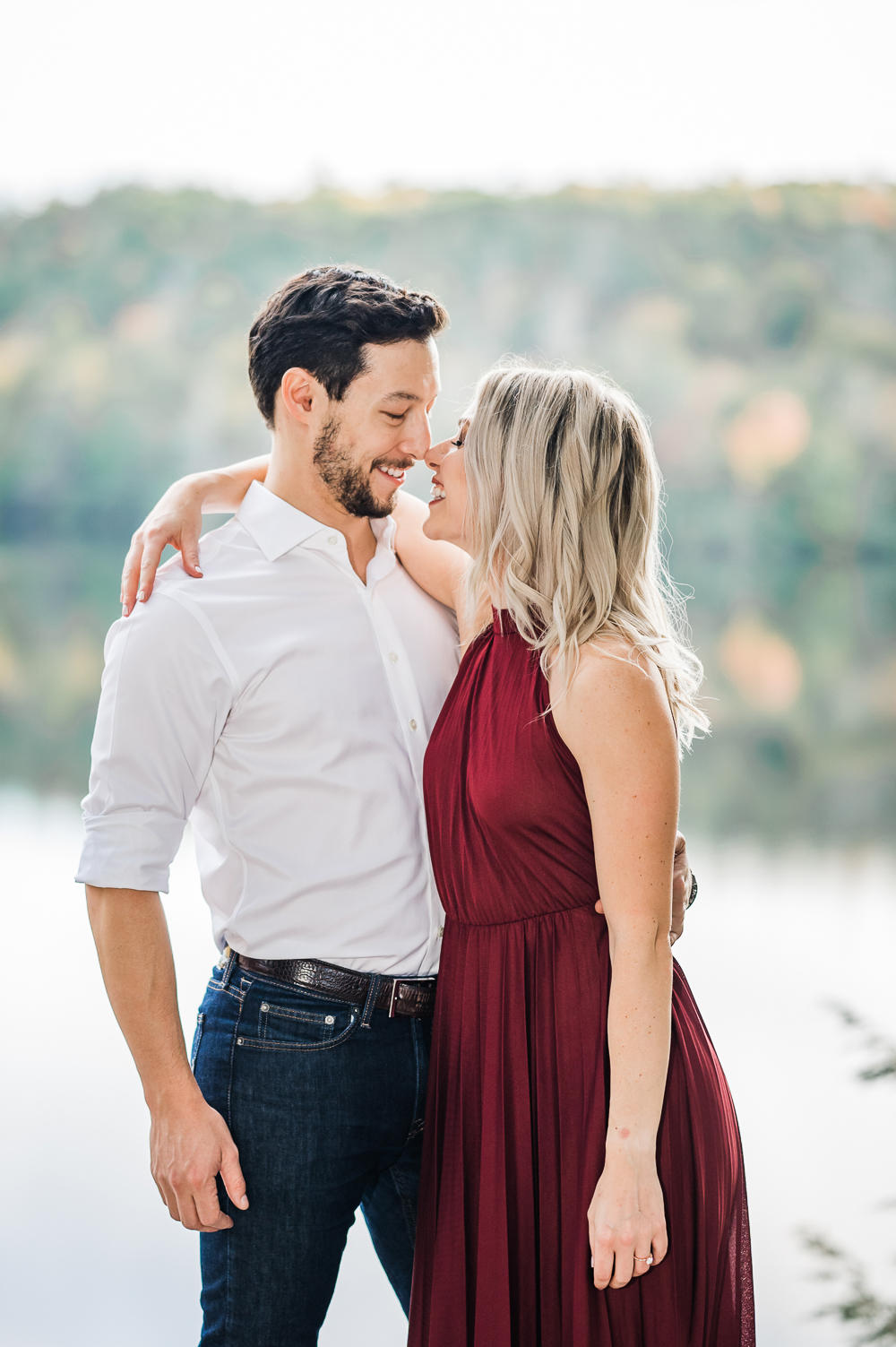 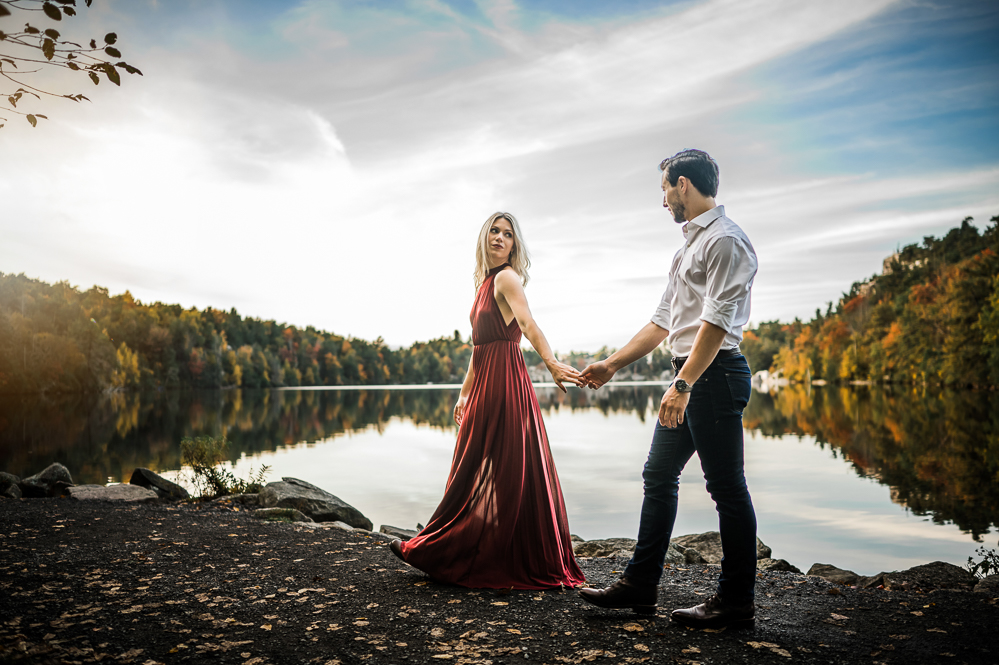 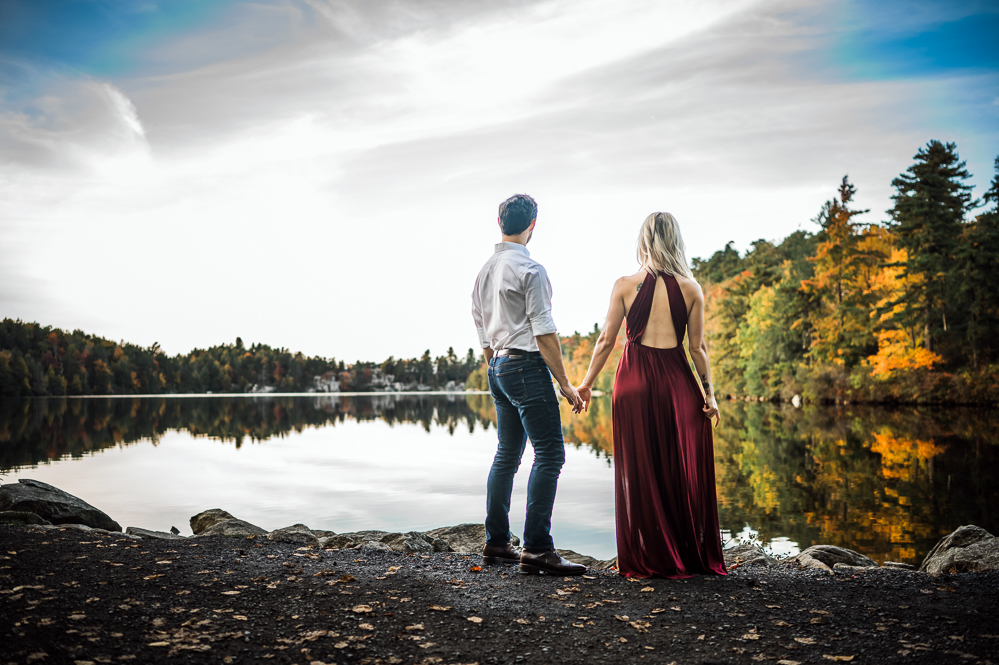 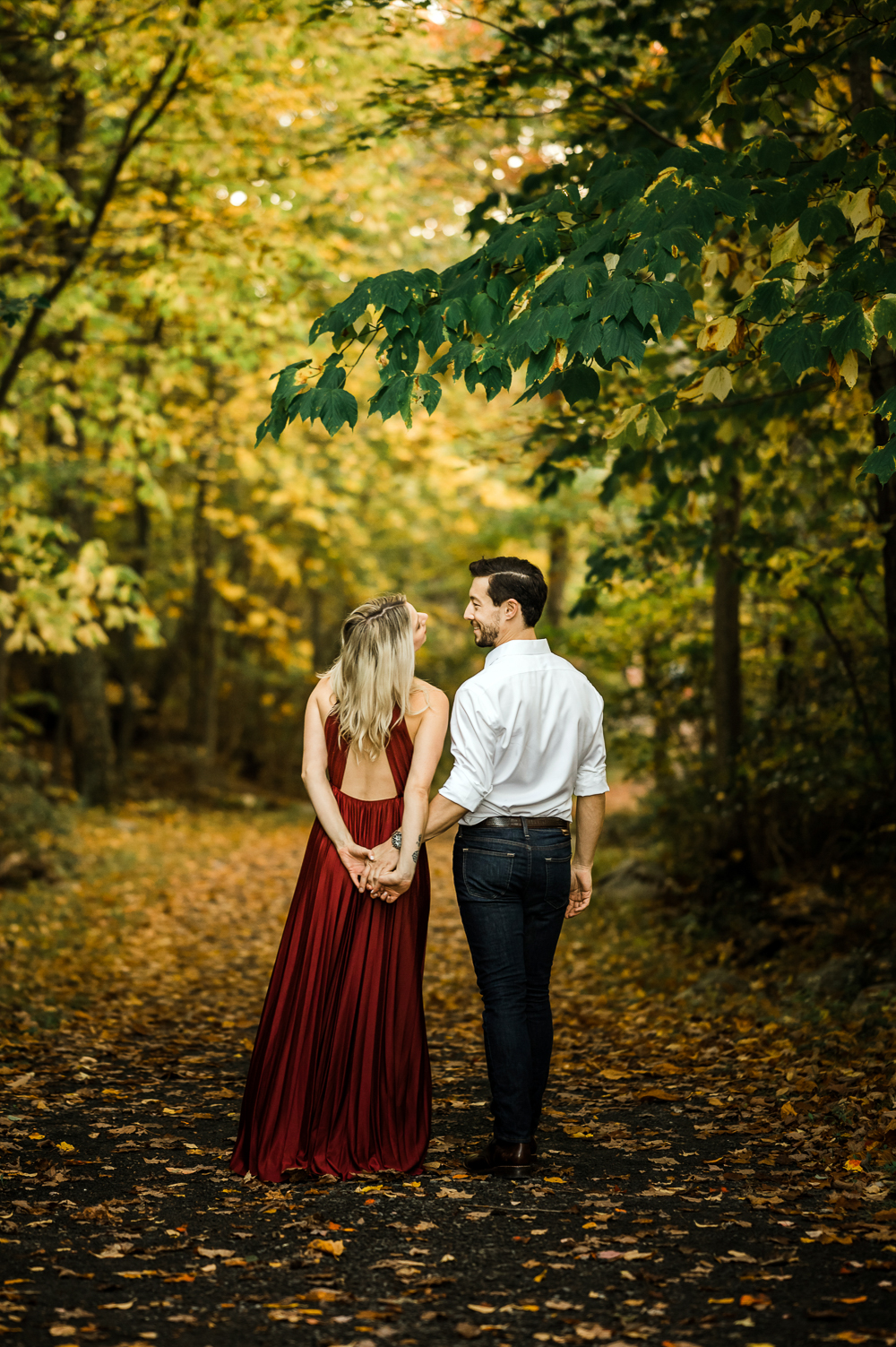 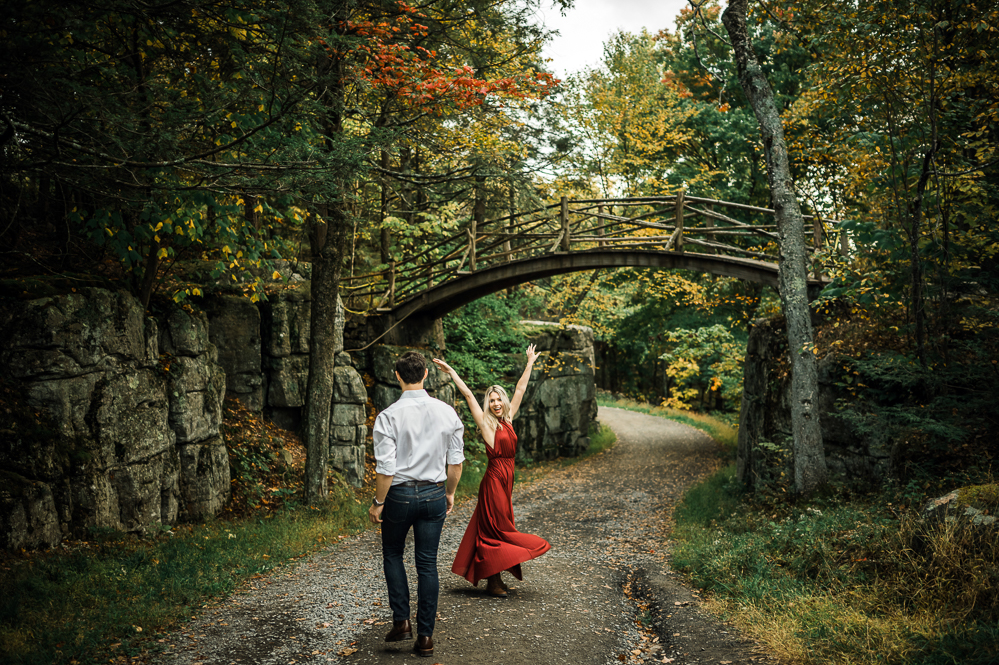 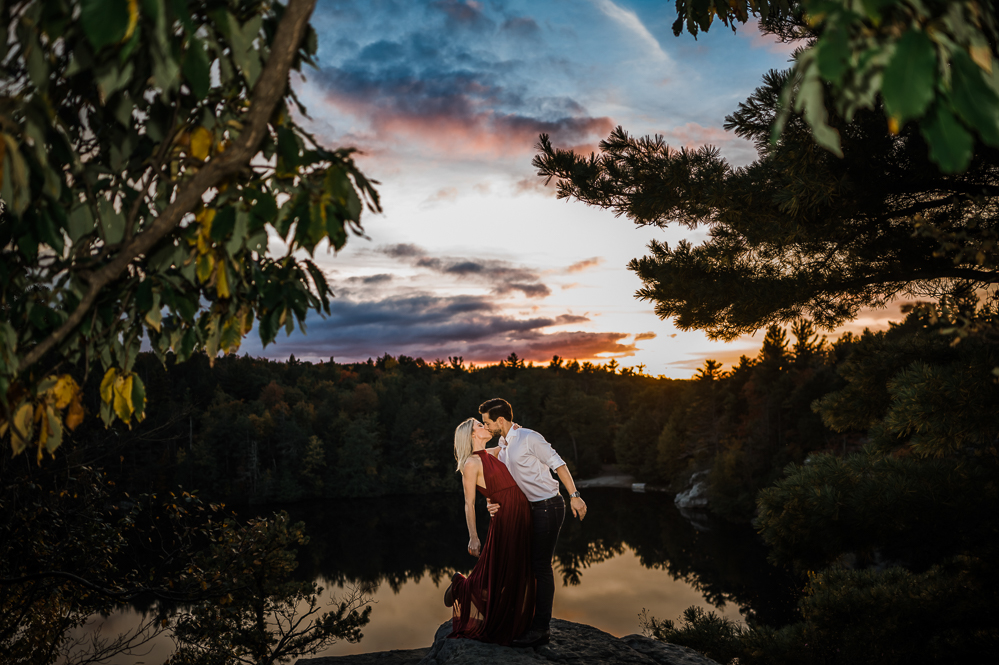 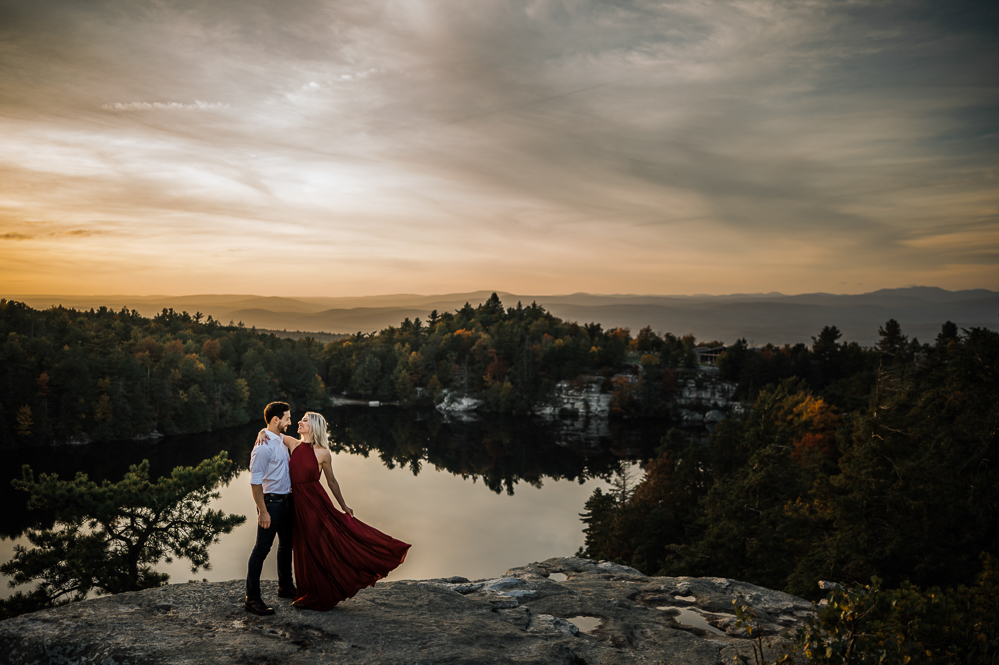 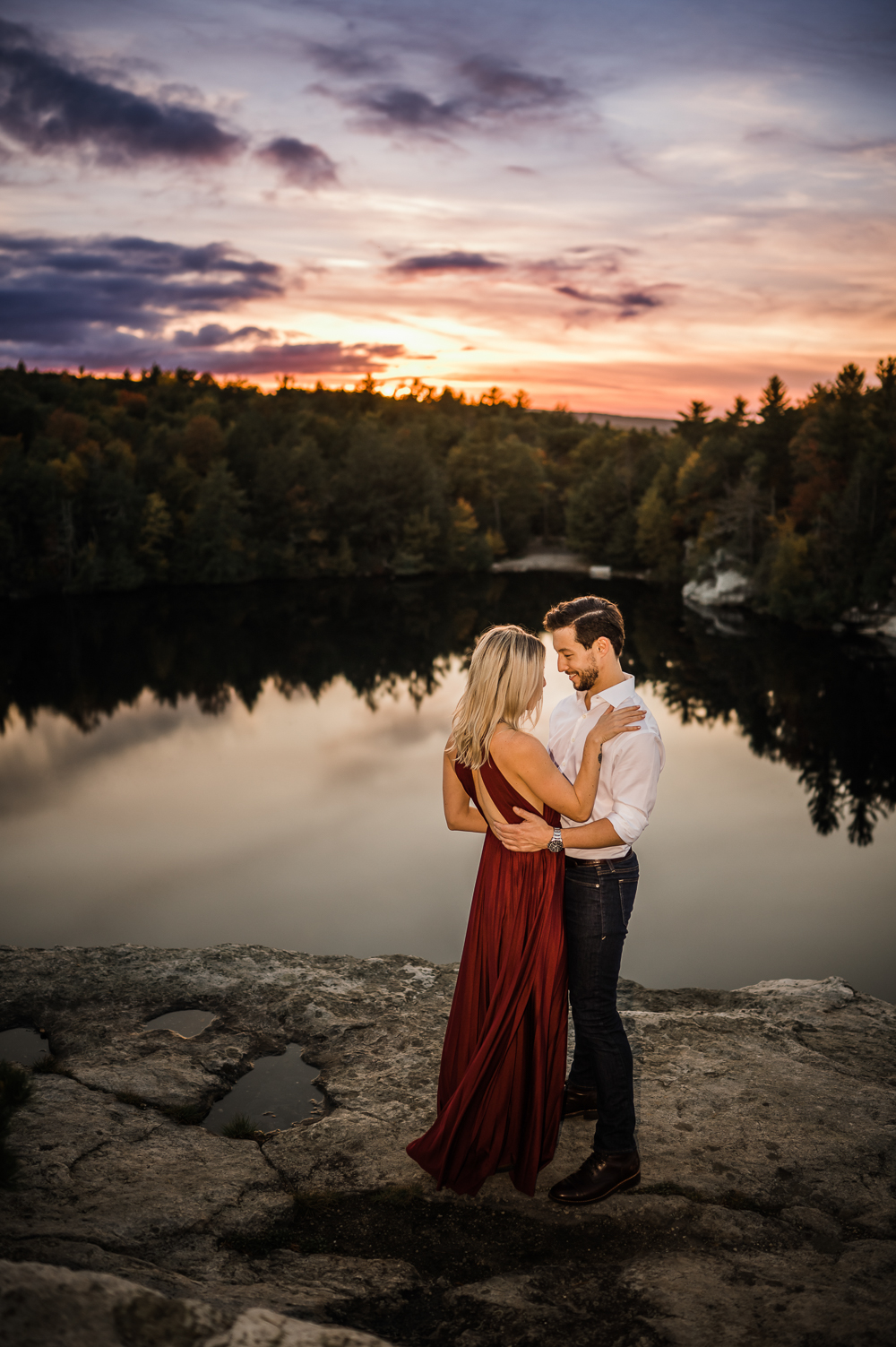 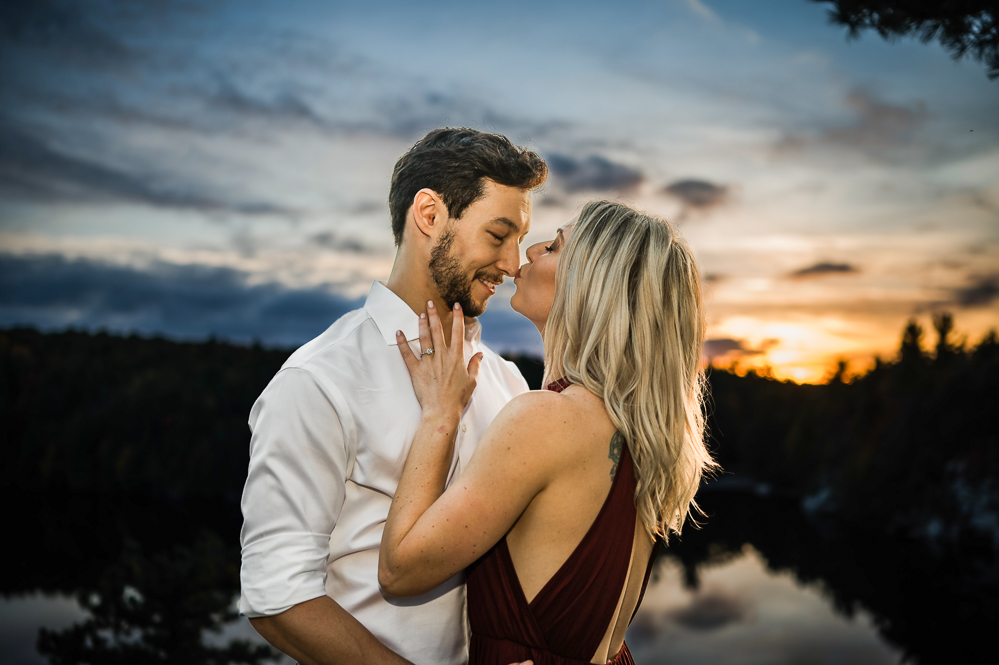 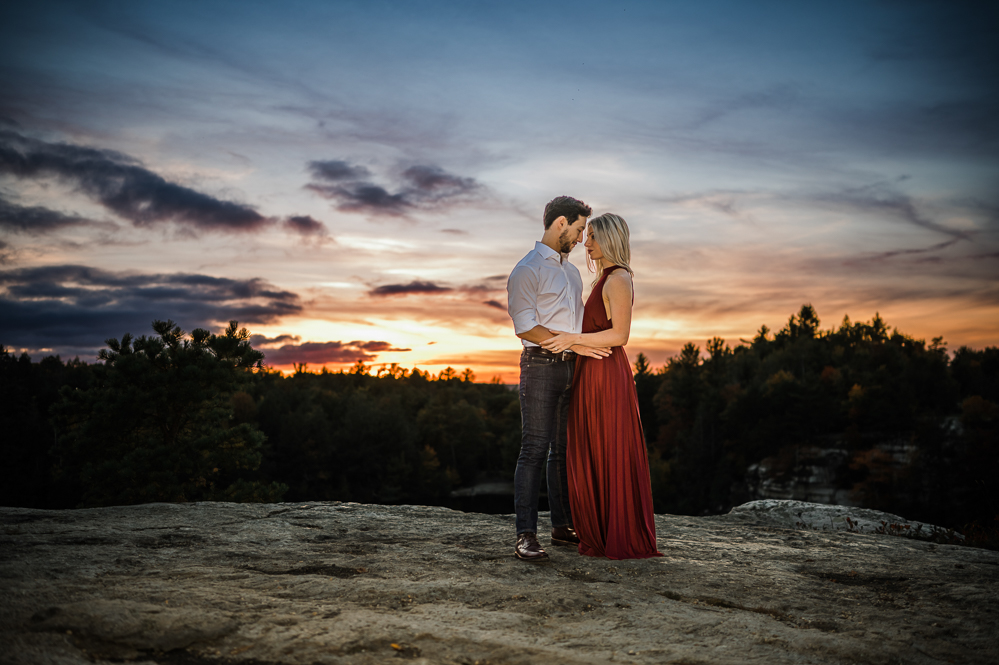 Hillary sold Ethan a gym membership at a fancy gym. He decided to join, maybe against his better judgement, to impress her. Fast forward a couple months, and he gathered the nerve to ask her on a date. After date 1, we were inseparable.

Hillary was planning Ethan’s 29th birthday party. She decided to plan a brunch birthday at Tavern on the Green, an iconic restaurant in the heart of Central Park. We invited two of our couple friends, and decided to dress up to make the day special. Ethan decided to hijack his own birthday party to propose. We decided to go on a walk before brunch, and the friends suggested we get a photo in front of Bethesda Fountain. As Hillary thought she was framing a photo for the group, Ethan got down on one knee. To put an NYC-spin on the story, a homeless man decided he wanted to take a shower in the fountain behind the couple during this moment, and cheered us on loudly as Ethan proposed. Hillary couldn’t hear anything except him, and she’s pretty sure she blacked out. We wouldn’t change a thing

Tell us about the ring/band.

Hillary is obsessed with her ring. Ethan actually proposed with a placeholder ring, and the couple picked out the forever ring together a couple weeks later. Ethan knew Hillary would be annoyed if it wasn’t exactly what she wanted. The forever ring is rose gold with a 8mm (2 carat equivalent) moissanite round cut ring set on the Versailles band from Brilliant Earth. It has alternating small round and marquis diamonds half way around the band.

Tell us about your engagement shoot outfits and accessories.

We decided to have two looks-one casual and one a little more formal, but not too formal since our engagement shoot was outdoors in the mountains. For our casual outfit, we wore complementary sweaters in neutral colors with dark jeans/pants and brown boots. We felt that our outfits were something we’d wear in our daily lives, and boots and Hillary’s wide-brimmed hat added a little earthiness to the looks. For our formal looks, Hillary wanted a dress color that worked well with changing fall leaves in upstate NY, and wanted to ensure that the dress would be flowy so it would photograph with movement. She wanted something backless that shows off all the work she does in the gym. Ethan just needed to look presentable, so we dressed him in a simple white button down and nice jeans. We kept on our boots. Hillary brought heels but we were outdoors running around and boots just felt right.

Accessories – Ethan doesn’t accessorize, but Hillary kept it simple. She wore simple earrings, kept her nails neutral, and had a wide-brimmed black hat only for the causal outfit. It made it easier to move and change.

Why a Mountain Wedding?

My session was just an engagement photo shoot, so we need to start with that caveat. And, we specifically wanted an amazing mountain engagement session because we opted not to do a fully mountain wedding. We wanted to do an engagement session in the mountains because there is truly not a more beautiful, more majestic backdrop. Hillary really lead this decision. She wanted her photos to feel magical, and reflect the sense of adventure we both have. The place we chose has such an incredible variety of natural backdrops, from sweeping mountain views to tree canopies to waterfalls.

What’s your biggest piece of advice for other couples planning a mountain wedding?

Our biggest advice is to wear comfortable shoes and take a brush. Hillary did not take a brush and she wishes she would have (but messy mountain hair is part of the fun, right?).